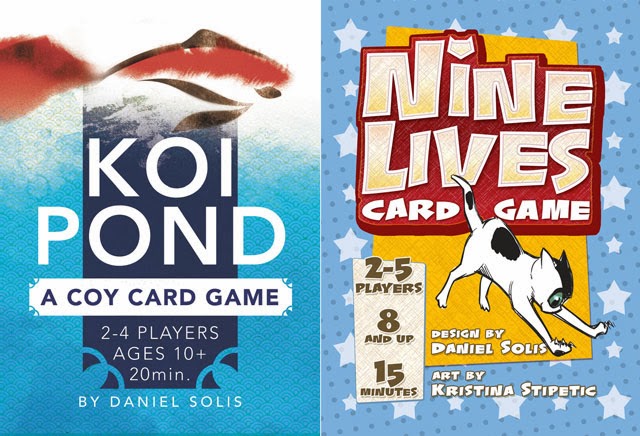 It's time for another monthly sales report! (You can see past sales reports here.) December 2013 was an odd month since no new product was released. I had planned on getting Koi Pond: Moon Village out, but it had to be delayed because of my freelance work load. My goal remains late January so I can kick off 2014 on a monthly schedule. But enough about the future, let's look at the past month!

Clearly Koi Pond was the big hit of the holiday season. Good thing the expansion will be coming soon to treat those new fans! Alas, Nine Lives dropped a bit and Suspense had a precipitous drop in sales. Not sure what the life cycle has in store for those two products, but they're both young so I'm not discouraged. Besides, the beauty of POD is that they're not costing me anything to list. They'll never go out of print!

2014 will be the first full year where I'll self-publish my own card games. It's going to be a demanding schedule full of playtesting, refinement, development, and caffeine. I might have to cut down on my rampant ideation and instead focus on wrapping up my existing projects.
sales report