Belle of the Ball Prototype M Sent to Playtesters

The truth is that I'm completely making this up as I go along. Case in point: I don't know what the proper protocol is for sending out prototypes to blind playtesters, so I just assume I gotta make it as neat and tidy as I can.

Above, you can see the packet I sent out to Prototype M playtesters yesterday. It includes a half-letter staple-bound rule booklet, prototype cards in penny sleeves, a pre-sorted deck for easy first-play. I also included the following letter. 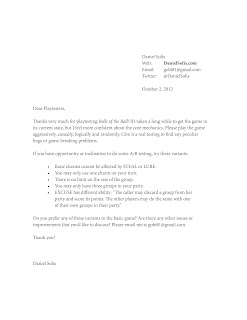 Thanks very much for playtesting Belle of the Ball! It’s taken a long while to get the game in its current state, but I feel more confident about the core mechanics. Please play the game aggressively, casually, logically and randomly. Give it a real testing to find any peculiar bugs or game-breaking problems.

If you have opportunity or inclination to do some A/B testing, try these variants:


Do you prefer any of these variants to the basic game? Are there any other issues or improvements that you’d like to discuss? Please email me at gobi81@gmail.com.


Again, I don't know if that's an appropriate letter. Have you sent out prototypes for playtesting? How have you packaged them?