What to do when your game is too balanced? Try zero-sum mechanics. [Monsoon Market] 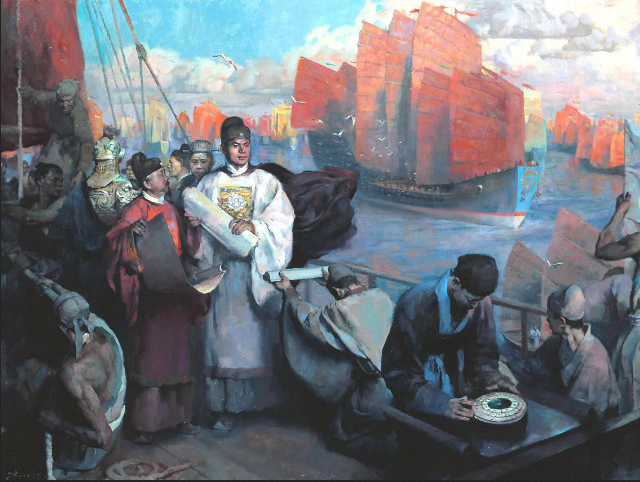 I've playtested Monsoon Market Prototype B a few times now. It turned out to be waaaay too balanced. Ties happen all the time. It seems that any random deal across three rounds will result in some score around 20ish. That's great for new players who don't like getting thwomped in the first game, but sucks for any experienced players who find no way to break out of the pack. But first, a recap:

Monsoon Market is a drafting game set in the Indian Ocean trade network during the middle ages, before European contact. Players have a public tableau, called their Port, featuring several goods cards. Each players also have a hand of goods cards, called their Ship.

Each turn, the ships sail to a neighboring port (hands pass to the left). Then each player may trade one goods card from her port for a goods card from the ship currently at her port. When the round is over, each player's ships return to their home port with whatever cargo they've collected in their journey.

The goods cards feature a common good at the top and a rare good at the bottom. From among all the cards in port and from your ship, you can build scoring sets or set aside cards for their gold value to use at auction for special abilities between rounds.

I need zero-sum mechanics to add some texture to this smooth distribution. In other words, bonus points that only one or a few players can claim. 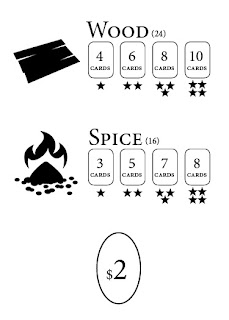 Problem: I thought I was being clever showing a common good and a rare good on the same card, thus making every card valuable in at least one way. Unfortunately, this made scoring a bit laborious as you had to cross-reference and count icons across several overlapping sets.

Solution: Instead of one of the three common goods, I'm going to depict one of the three major continents of the Indian Ocean network: Asia, India, Africa. Each round focuses on one continent. Anyone who has the most cards of that continent at the end of the round gets a major bonus. If tied, split the bonus, rounding down. This still keeps each card valuable, but in two much more different ways. It also keeps goods-scoring simpler. More importantly, it's a score that only one or a few players can claim.

Problem: If I make the noted change to the common good on each goods card, that makes each card represent just one unit of one particular good. This makes building up a set a very slow and predictable process of adding one unit at a time to any set. It's time to add some leaps and jumps. I want players to feel a little more delight when they get a valuable card.

Solution: While each card only represents one type of good, it may also represent more than one unit of that good. One is most common, two is rare, and three is very rare indeed. This would allow you to build up pretty strong sets really fast with a good trade or a lucky draw. I will also make sure these high-value cards are also valuable in the auction described below, giving them divergent, mutually exclusive tactical value.

Problem: Between rounds, Zheng He, the famous Chinese fleet admiral visits each player's port and offers a gift from the Chinese emperor. This is represented by an auction. Players use any remaining gold value from unscored goods cards to bid for first choice of n randomly drawn special abilities. Presently these do not have point values of their own. Most simply count as one permanent rare good, allowing more opportunity to score. Others allow you to dump cargo from an opponent's ship. Things like that.

Problem: You may recall my post on triangular and square number sequences and how they're used in game design. Usually it's something like, this: "If you collect X bananas, earn Y points." In my case, my figurative numbers are the number of bananas you'd have to collect to earn a certain number of points. I'd like to do this again in a very different way that is easier to score.

Solution: I'm assigning each triangular number to a placement ranking for collecting a particular thing. Let's say some cards will feature one, two or three ship icons. These represent the fleet you're building for your trading empire. At the end of the round, before scoring and before the auction, players can set aside as many cards as they like face-down. These will be kept for the whole game. They are not scored for sets or used at the auction. Instead, at the end of the whole game whoever has the biggest fleet wins the top bonus score noted below, followed by second-place and so on.


With all these tweaks, I don't think ties will be much of a problem anymore. They all offer some interesting, divergent new tactics to explore mid-game. But testing is required to confirm if these solutions really art solutions!
game design monsoon market