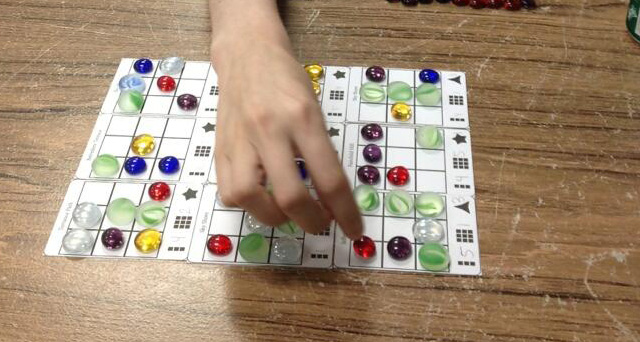 Picking up on yesterday's thoughts about converting classic games to something gamers might enjoy, let's talk about the one game possibly more dismissed than roll-and-move: Tic Tac Toe. It's a solved game, as any fans of Matthew Broderick movies will know. The only way to win is to not play.

Then I recently learned about Ultimate Tic Tac Toe. It's played on a 3x3 grid, with each cell containing a standard 3x3 tic tac toe board. On your turn, you place your mark on one of the tiny boards, which in turn forces the next player to make their mark on the corresponding big board. Whoever wins a tiny board lays claim to that entire cell. If you're forced to play on a cell that is already won, you can play in any cell. If you claim three cells in a row, you win! You can see why this is also called "Inception Tic Tac Toe."

Alas, like regular TTT, UTTT has been sort of solved. There are optimal moves that will eventually lead to a tie. The trick with any "Gamer's" version of Tic Tac Toe will be to un-solve it. That is, find ways to introduce random initial states and offer alternate options that make traditionally sub-optimal choices actually worthwhile.

I wonder if there are some emergent properties yet unexplored by those mathematicians that could be tapped for deeper gameplay. I'm thinking about this in terms of yesterday's post on "Gamer's ____" games. So in this case, it would be "Gamer's Tic Tac Toe." 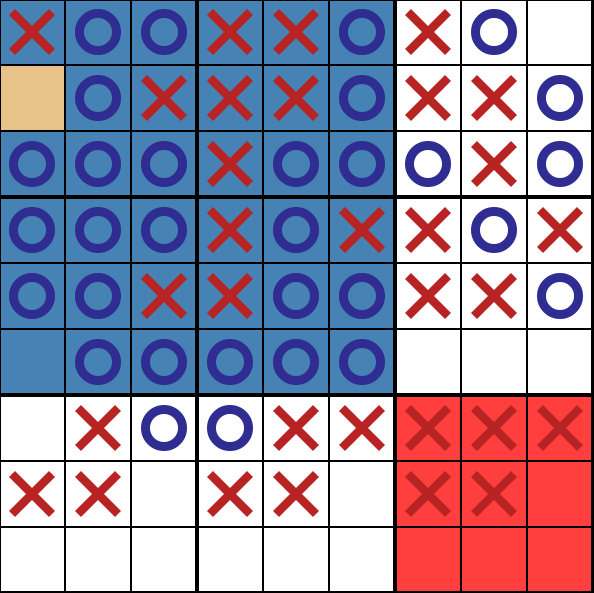 For example, red is losing this game but in the process has created a few long lines of five-in-a-row. Should that be worth something? Blue has also created long lines. Should that be worth something, too, or is that only the privilege of the player losing the cell strategy? What happens if a player makes a contiguous line that extends across the whole 9x9 game board? 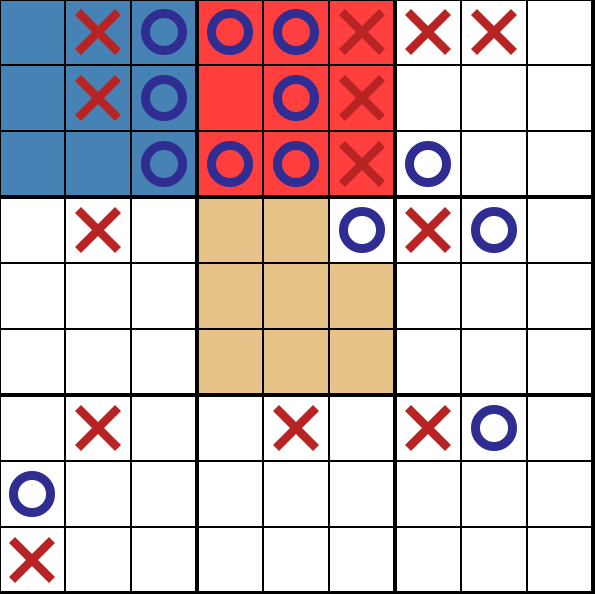 In another scenario, Blue has managed to create a perfect square that traverses two cells. Should that mean something? What if it traverse three squares? What if it was a 4x4 square? Does that have some effect on the marks within the square? Is there some kind of Go-like surrounding mechanic? What about other shapes, like Xs or triangles? 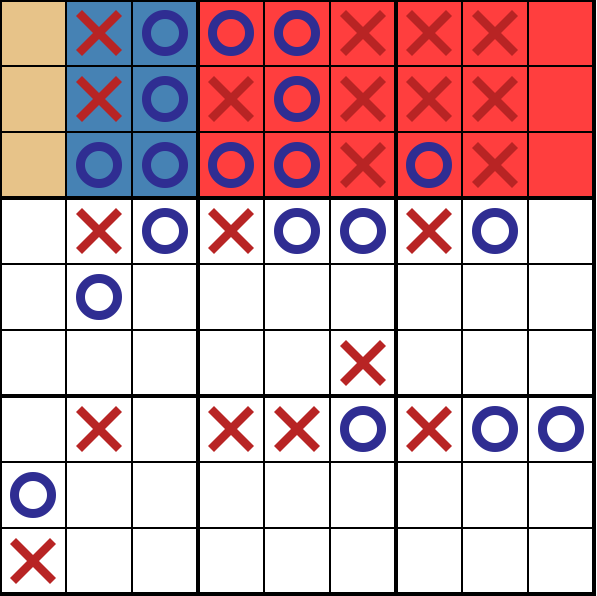 Presently, the only effect of being forced into a claimed cell is that you may then play in any cell. This acts as a deterrent to for your opponent to give you an advantage. I rather perfer incentives over deterrents though. What if you wanted to play in a claimed cell? What if there was some value still left to tap in that cell, despite you not getting the first three-in-a-row? Does having more marks in that cell give you some other reward?

And what if each cell had its own variable reward for being the first to 3-in-a-row, majority, or to be traversed by a long line? Imagine each cell is its own card, with its own stats.


Any discussion of n-in-a-row games and area control games has a long, long history to tap. For now, let's just find a theme so these weird emergent behaviors make some kind of sense as far as gameplay goals. 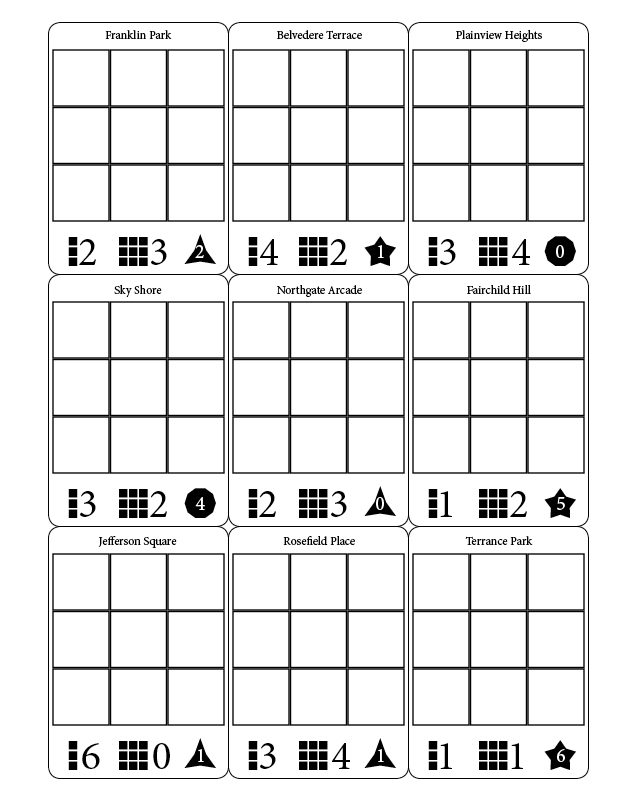 The board is comprised of nine randomly drawn cards. Each card is a city block with a real estate-sounding name. Each cell of the card represents a building up for sale. The numbers alongside the bottom of each card represent rewards based on certain conditions as described below. 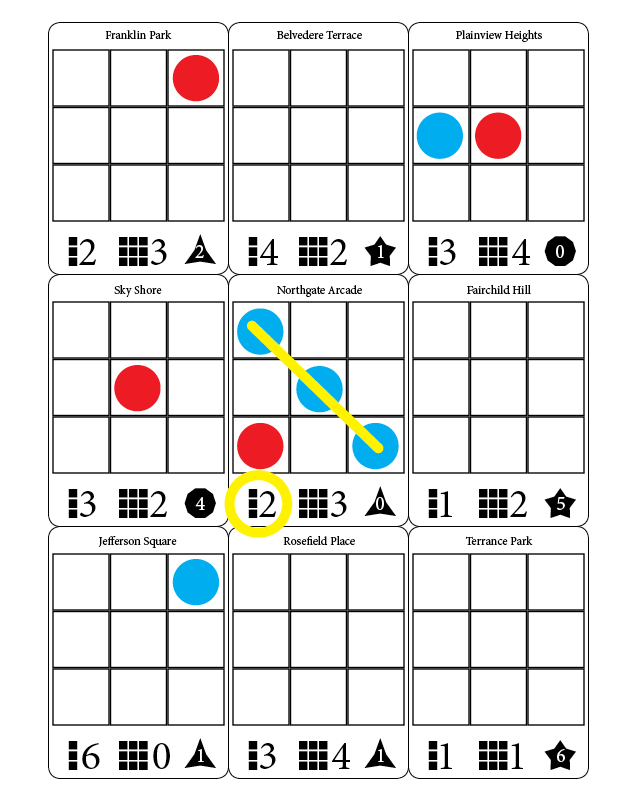 The first player to get three buildings in a row on a card gets the first reward noted on the card. In this case, blue gets 2 points. 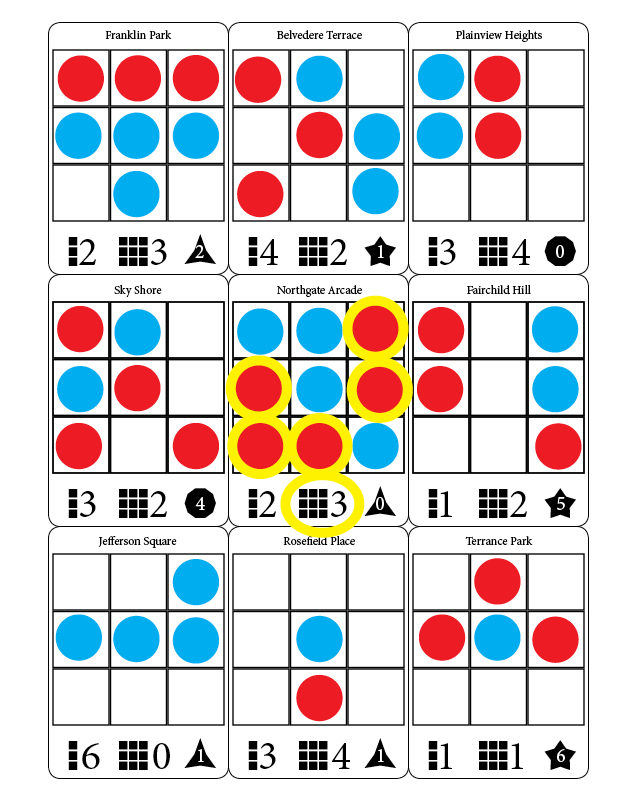 The first player to get five buildings on a card gets the majority on that card, but don't score that until the end of the game. 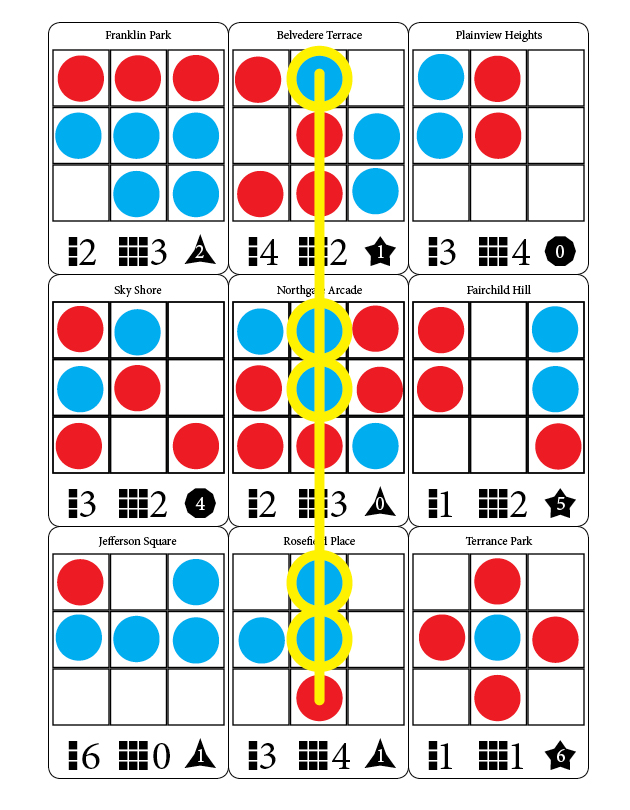 The round ends as soon as there is a continuous line of nine buildings. Whoever has the majority of buildings on that line gets a 3 point bonus. 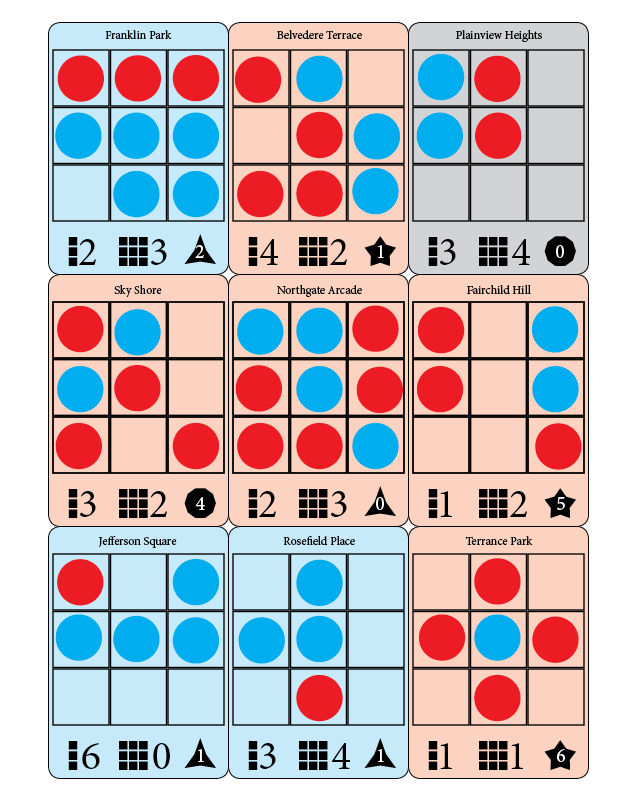 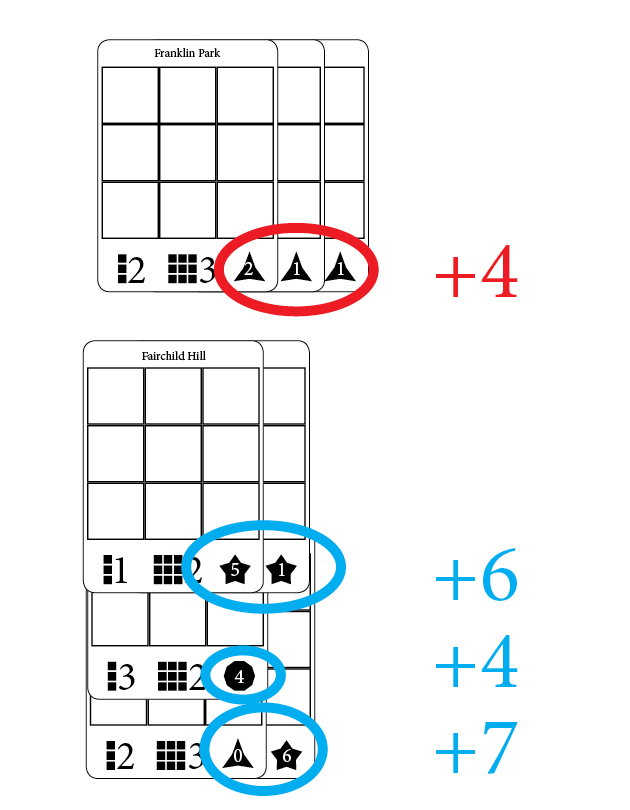 Now here's a twist. That player who did not get area majority on a card collects that card. In essence, the player who loses the area majority contest wins the card, which itself is worth points as a set at the end of the game. At the end of the game, organize your collected cards by their symbols. Score the highest value of each set, plus 1 for each extra card in that set.


Or maybe islands?
I'm not really feeling the real estate theme, so maybe Islands would work better? Each cell is an island and the goal is to populate islands, building "bridges" of straight lines across the archipelago. 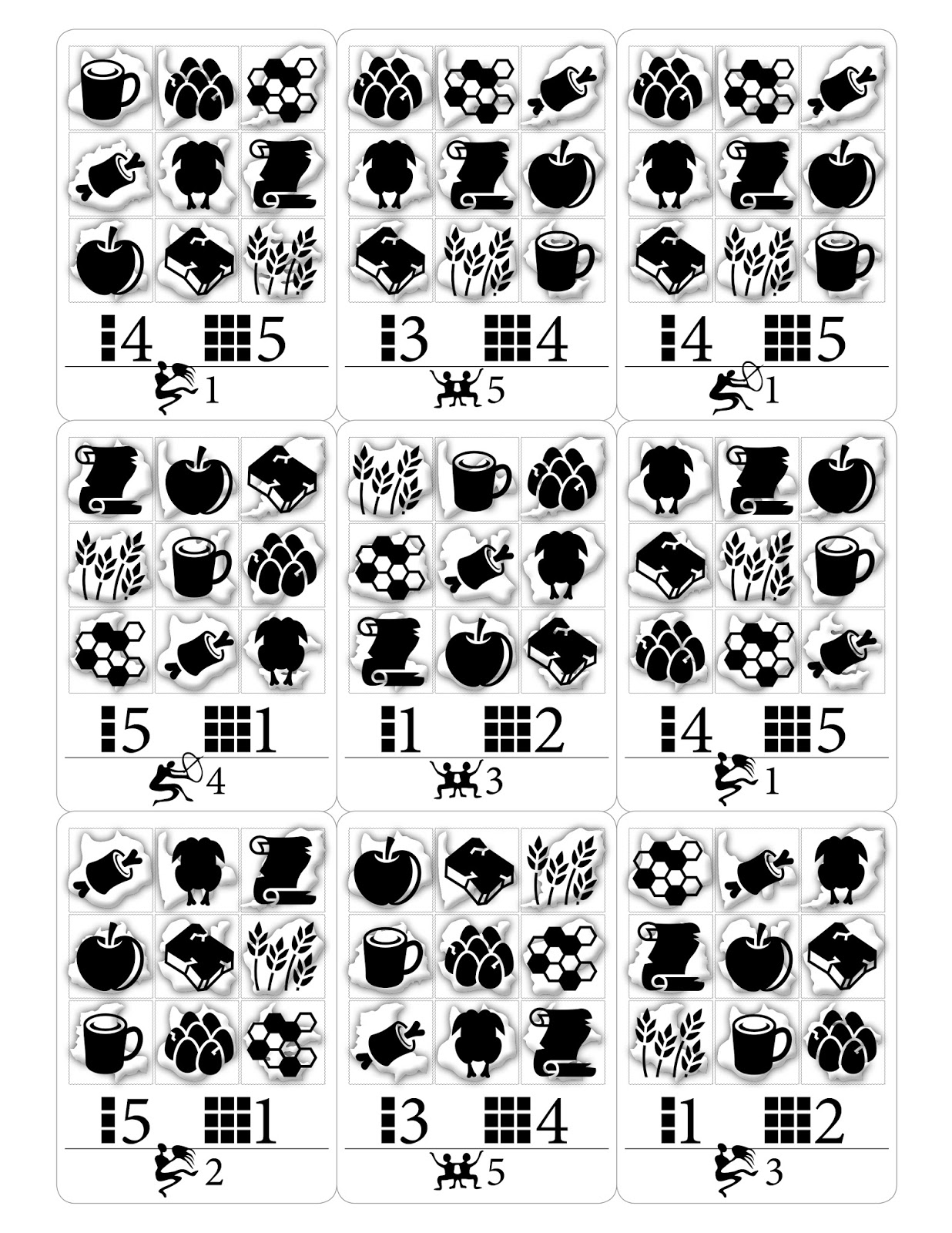 This suggests one more secondary mechanic. Imagine if each island offered its own resource, as shown above. I imagine these would be more island-themed eventually, so Taro, Coconuts, Mangoes, Bamboo, Shells, Fish, Pigs, Obsidian, and Water. Think of this as a worker placement game. Each time you place a stone, you acquire a resource from that island. 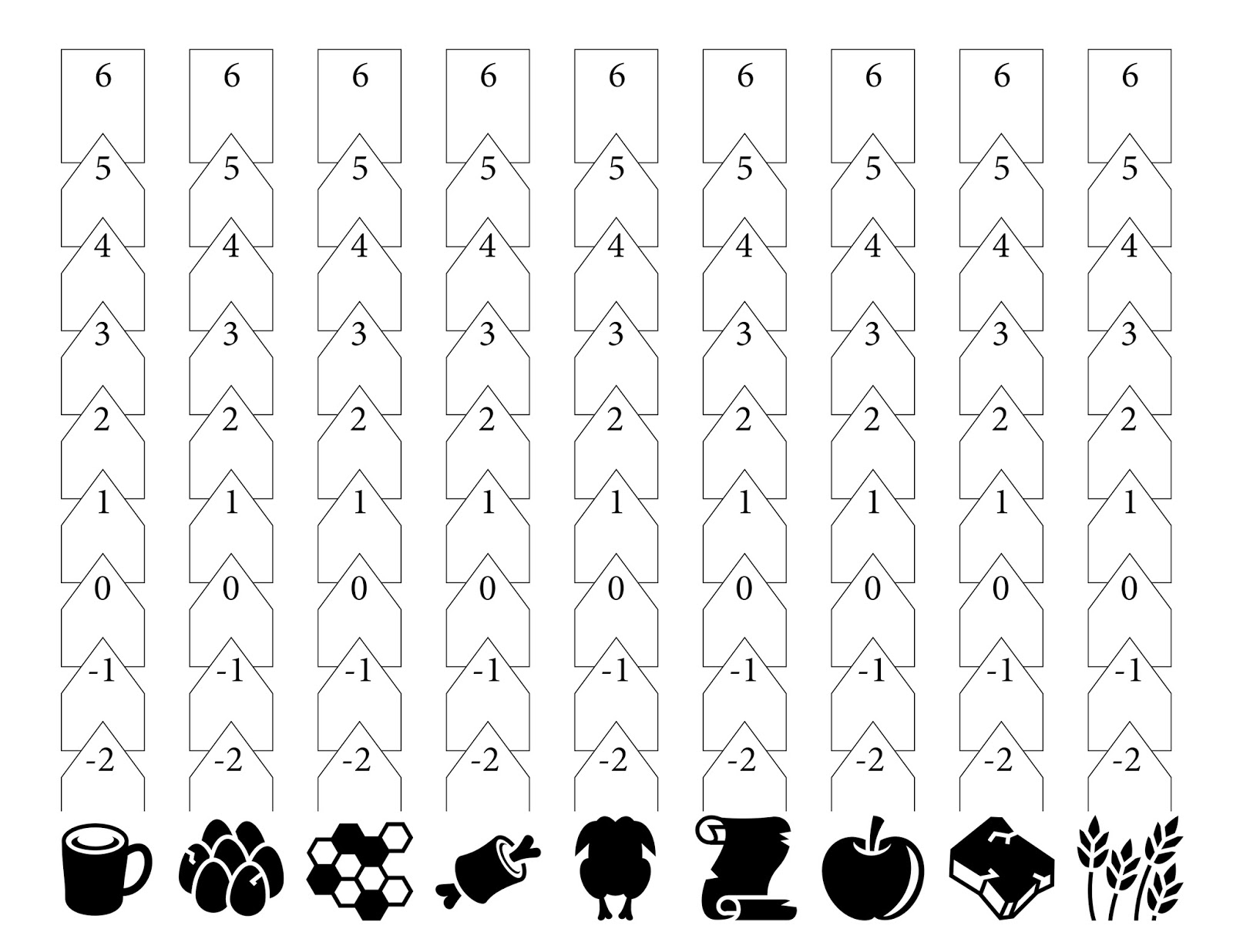 Resources would be noted on a separate board as shown above. Collecting the first of any resource starts you at a deficit, but eventually the reward is greater than any potential area majority or three-in-a-row. 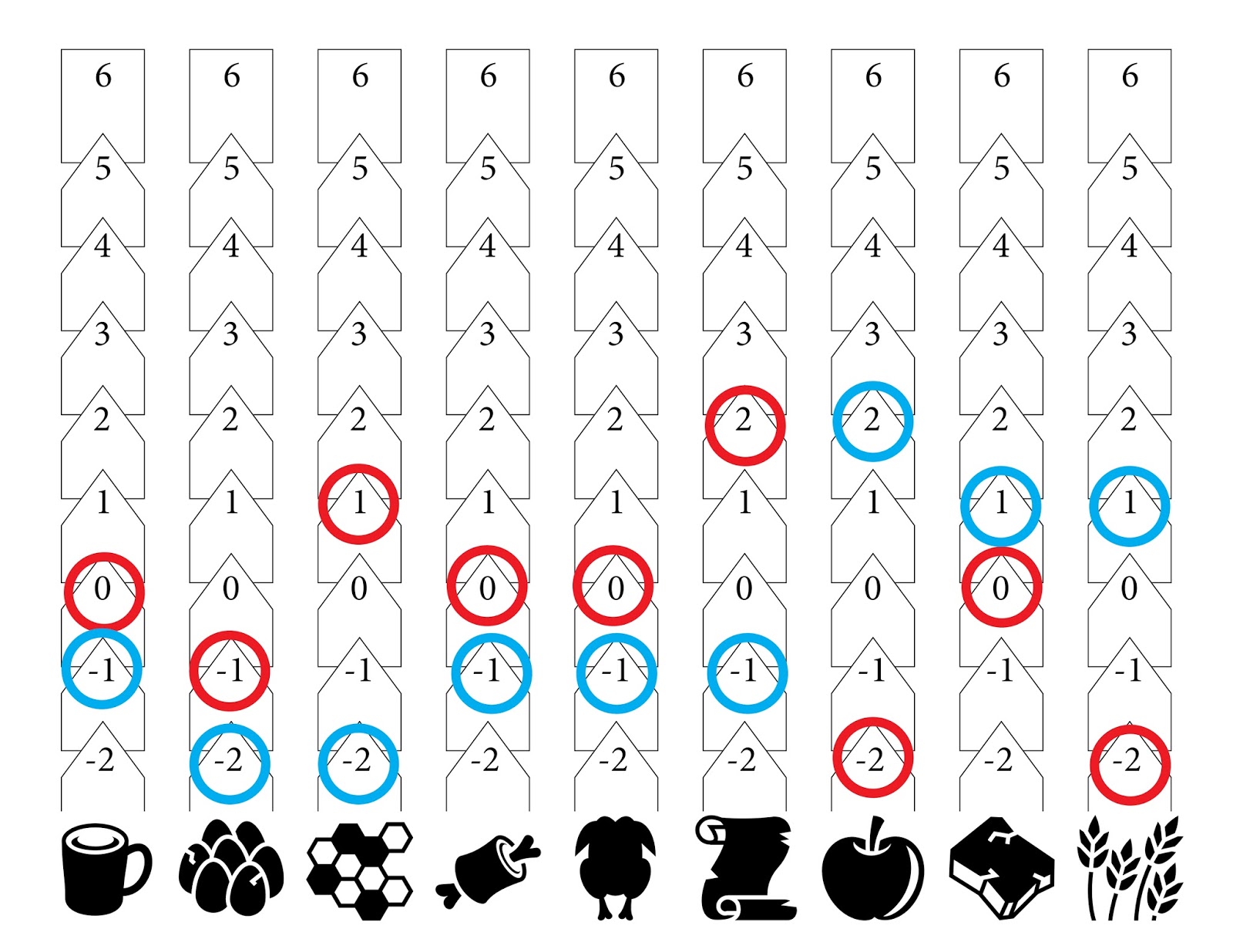 So when your opponent leads you to one of the boards, you're not only thinking about area majority or getting three-in-a-row, you're also thinking about the resource you want to get and which one you want to avoid. Being too diversified eventually leads to a wash, as shown above. Sometimes you want to sacrifice valuable lines or areas just to make sure you don't set forth on too costly a quest for mangos.

And in conclusion...
That's my first stab at a GTTT of some kind. Un-solve the original game by adding the following ingredients to make otherwise sub-optimal choices more enticing.

The methods of scoring points are pretty standard ingredients for eurogames. The minimum and maximum possible values are noted as well. The maximums assume a very extreme circumstance though, like the game continuing until the board is full or all the cards having optimal set-collection.

All that being the case, three-in-a-row is still a pretty strong incentive. It's tactically easier to do and leads to higher potential rewards depending on the board layout. That keeps in the spirit of the original game, but may still be unbalanced. I hope the other bonuses and considerations would make the decisions more satisfying though.

There are plenty more directions you could take this, of course. I recommend checking out Kory Heath's Blockers as a fine example of how to shape a 9x9 grid into a fiendish puzzle game. Whether mine is any good, I don't know.

For one thing, I have this loosey goosey idea of centering the grid on each card, thus making room for two unique sets of values for either player. So one player would find it more valuable to get area majority on a card while her opponent would prefer the first three-in-a-row.

And that's not even taking into consideration background art to add yet another level of information. But for now, five ways of scoring seems like enough.
game design GTTT