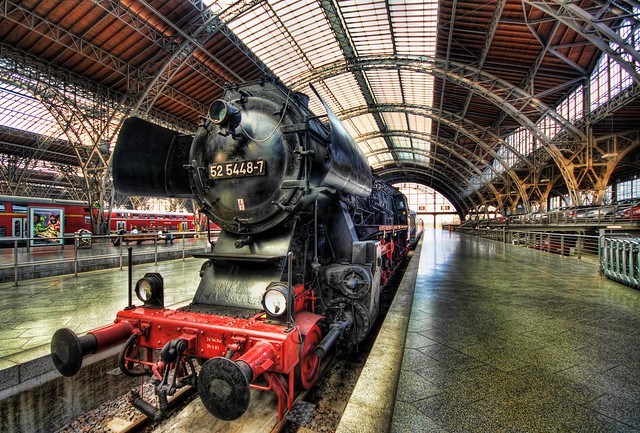 Last night I quickly sketched out a tile-based train-themed path-building game. I've been on a path-building kick the past few weeks so it kind of makes sense that it would eventually lead to a train game of some kind. Hopefully this adds some twists to the genre to make it worthy of further development. 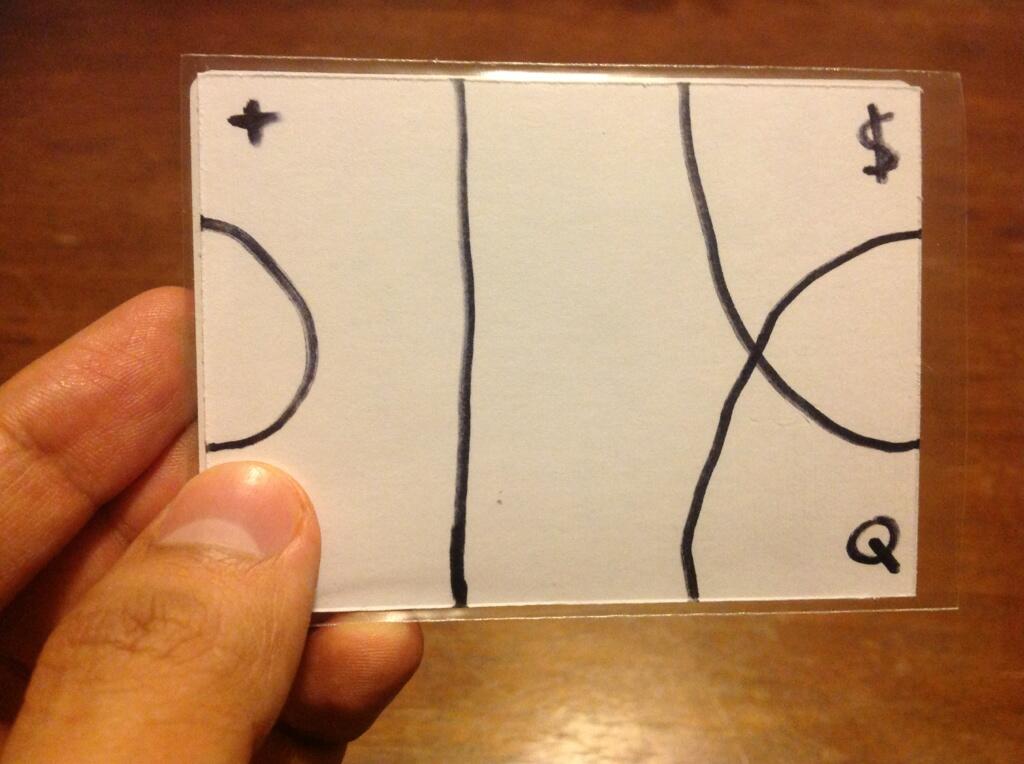 First, you start with the basic path tile, representing a supplier along a train route. Each path tile has eight exits, with for path segments linking them in some way. Each card also features four goods icons, noted here by the plus sign, the dollar sign and the Q. Any path connecting to this card is supplied the goods indicated by this card. 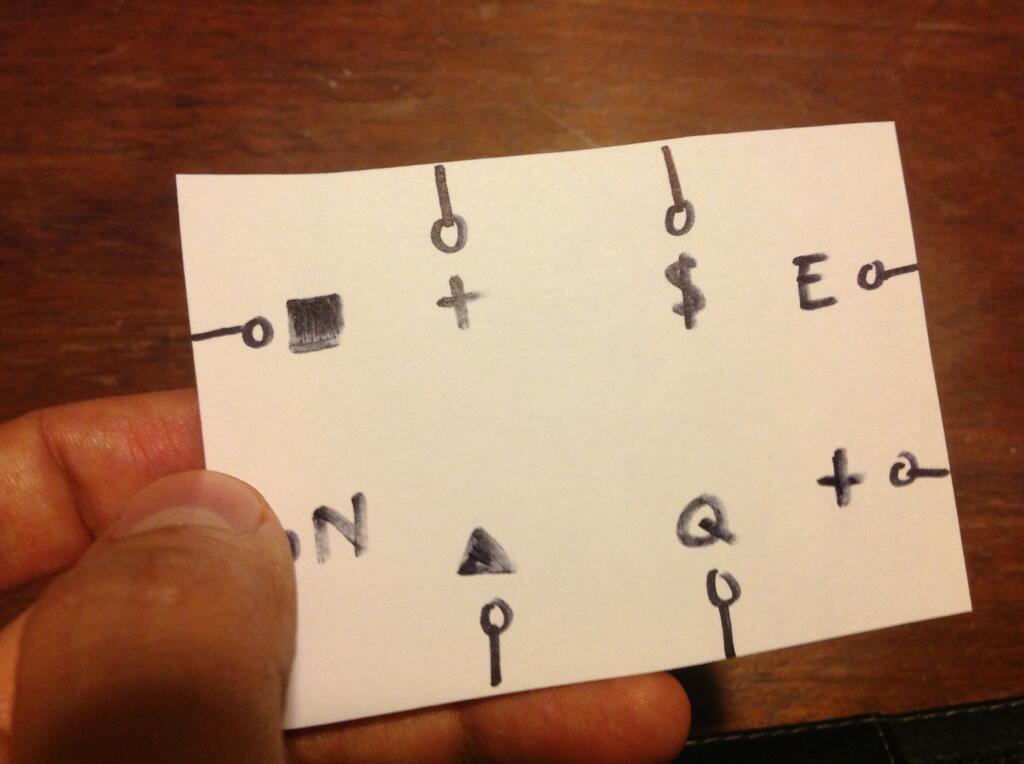 And these are destination cards, with eight endpoints for the train routes. Each of these is a port, each awaiting a specific good to come from the train. Along the top here you see a port that wants + and a dock that wants $. To the right, a port wants E, another wants +. 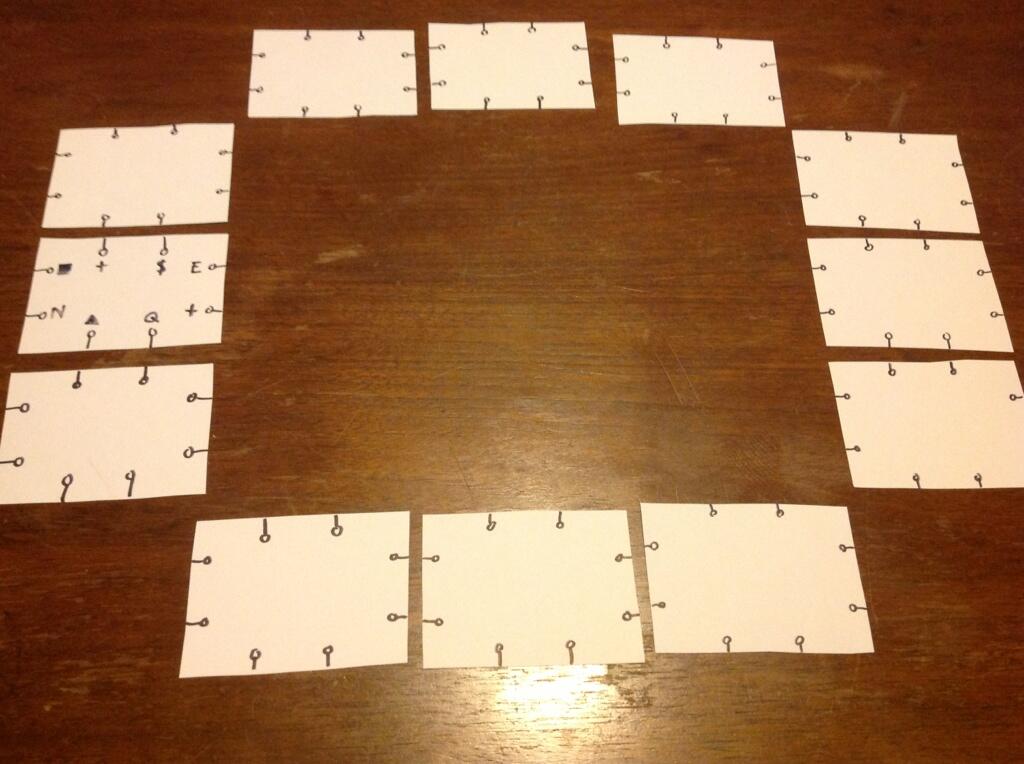 To set up the game, you randomly shuffle twelve destination cards around the perimeter of the play area like so. The play area is thus an implied 3x3 grid. Because of this arrangement, only two ports on a destination card are in play at any time. Hopefully this adds some replay value, as the demands for goods can change from game to game. (Note: I didn't have time to fill in all the ports with icons, but you get the idea. 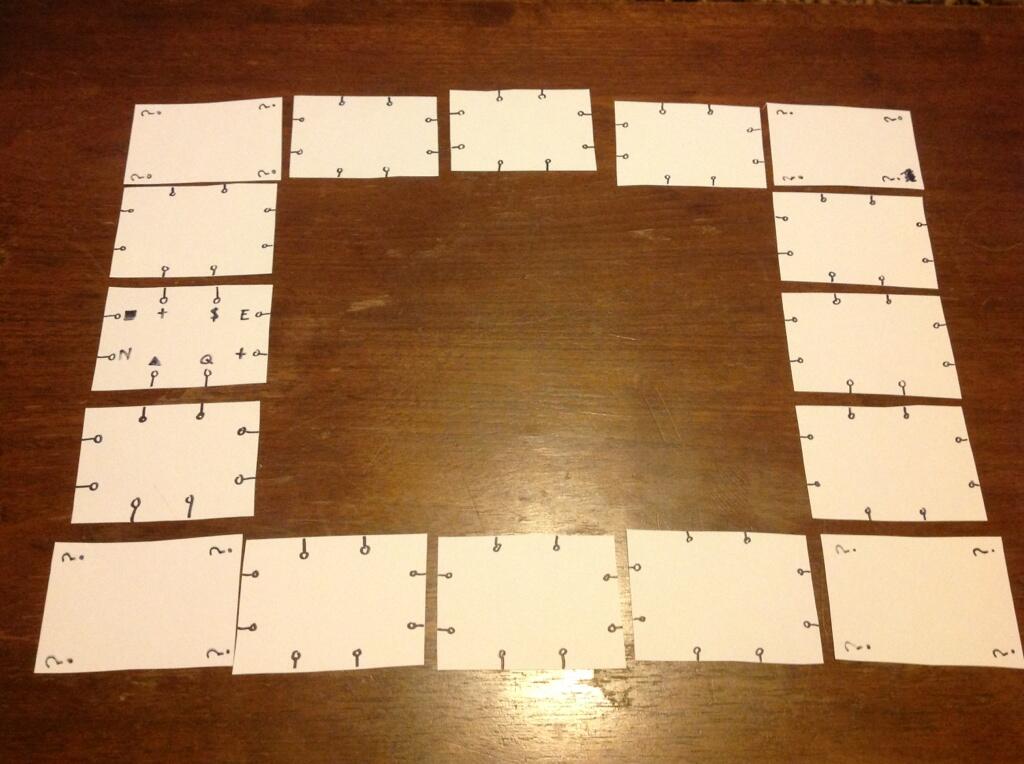 To complete setup, you place the Condition cards in the corners of the play area. These are optional play variants that add subtle changes to scoring or grant one-time-use abilities. I'll list some of these at the end of this post. 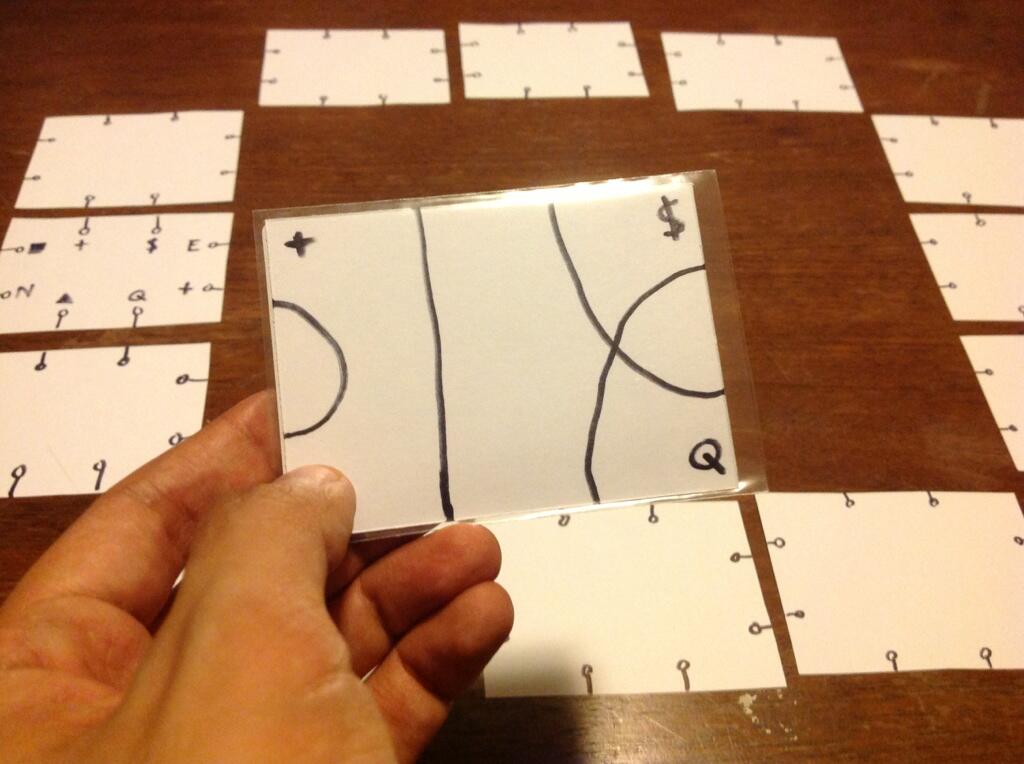 On your turn, you draw one random path tile... 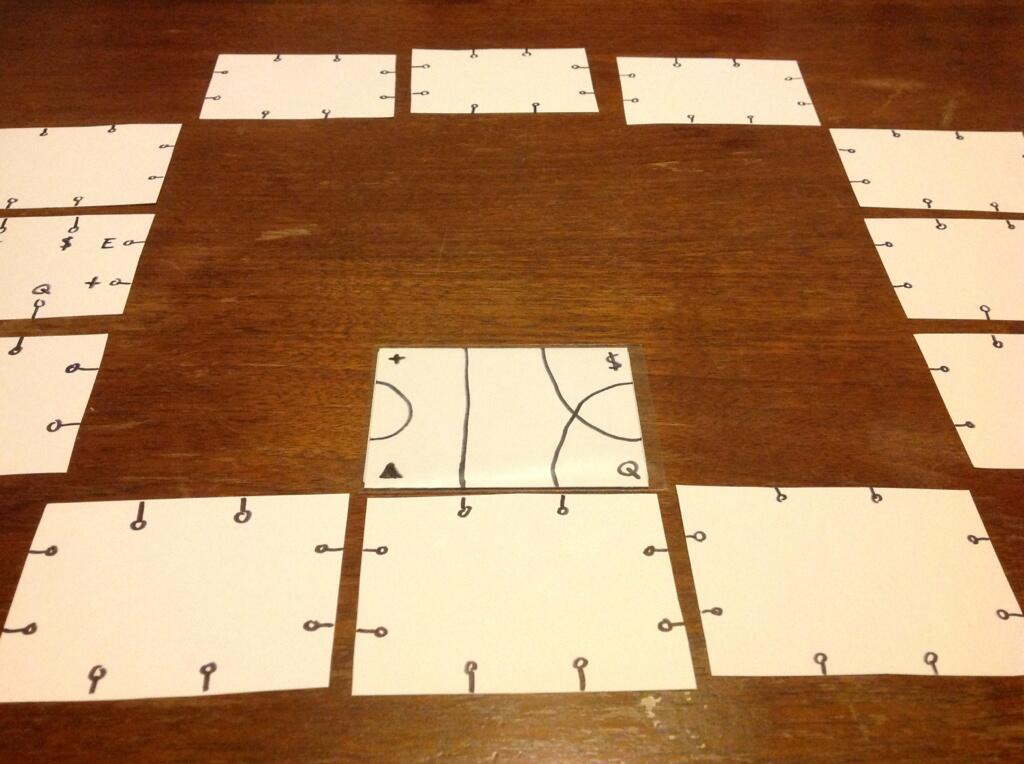 And place it adjacent to another card. 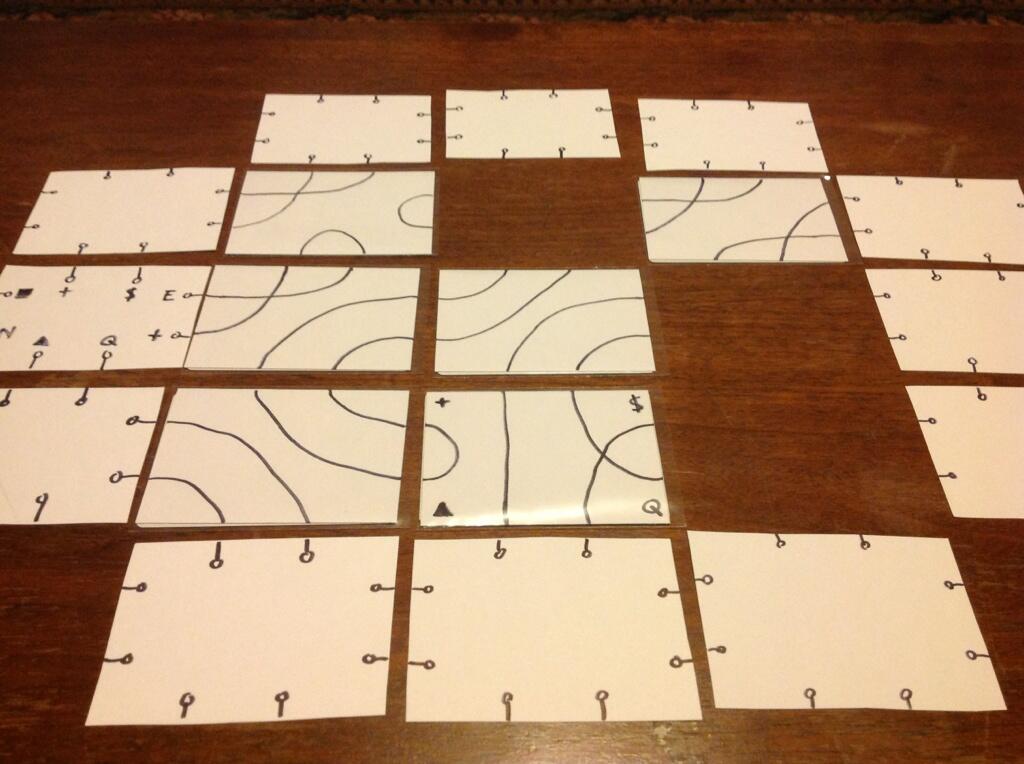 Continue taking turns in this manner, building up the network within the implied 3x3 grid. (Note, I didn't have time to fill in icons on all the path tiles, but hopefully you get the idea.) 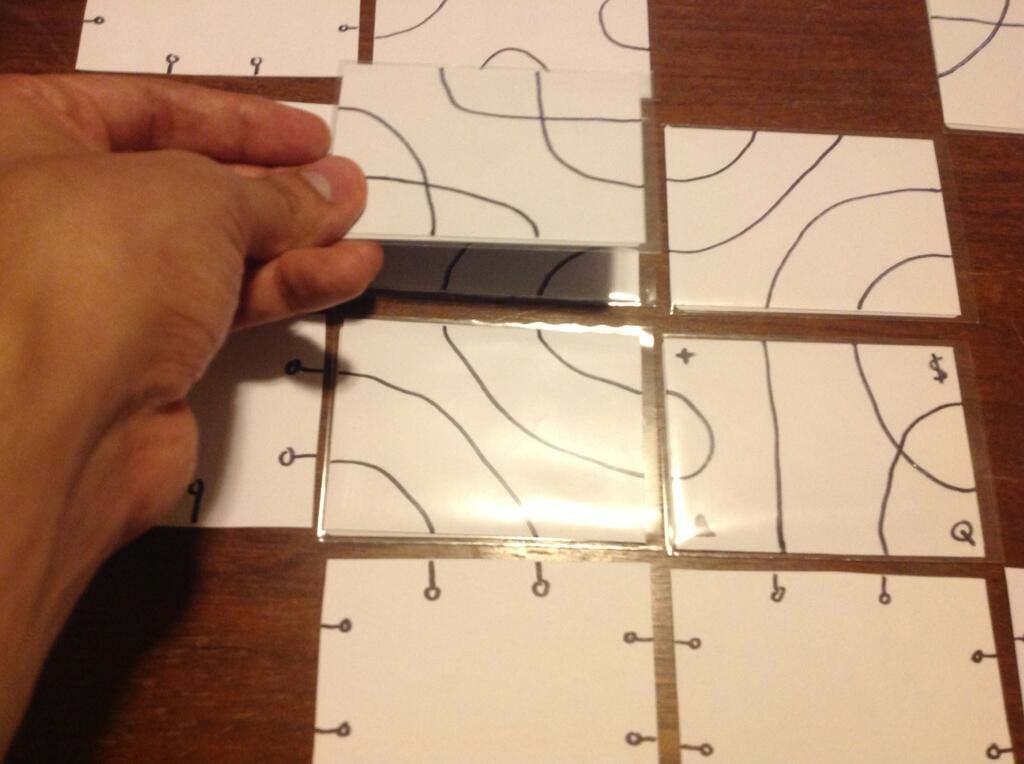 You may place tiles on top of other tiles. If this game were to use real thick tiles, they'd be easier to just pick up and replace, but for now I'm assuming cards which are easier to just stack. 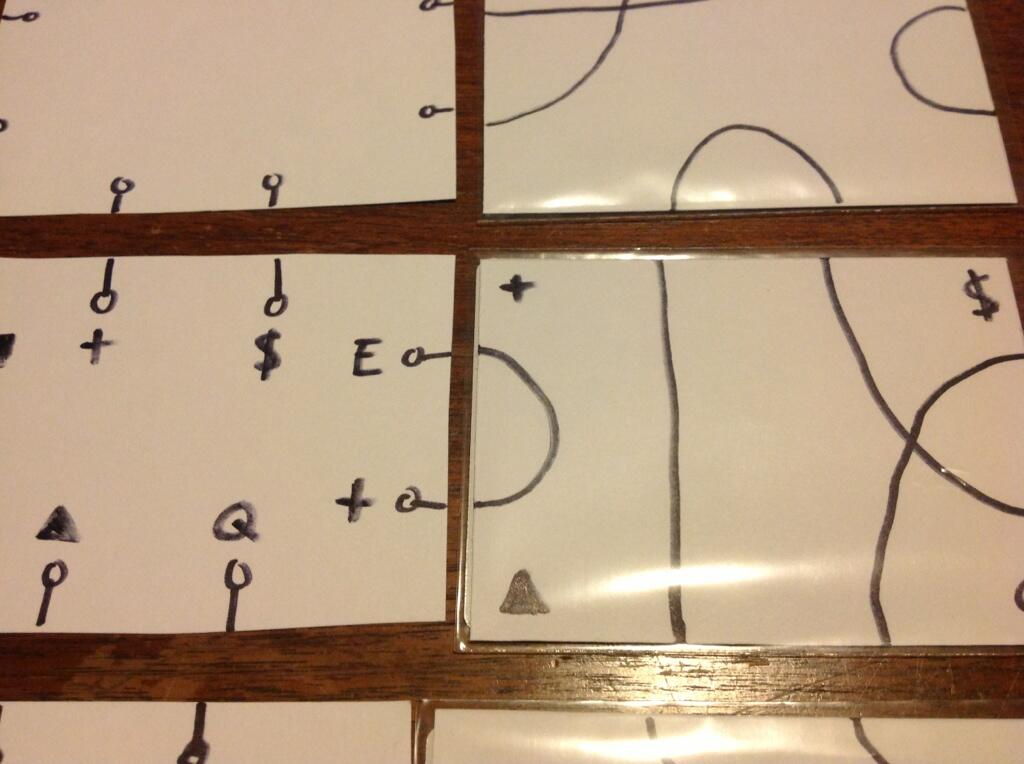 Any time you make a route that supplies a port with its requested good, you score one point for each of that good along that route. In this simple example, you score 1 point because you made a path that supplies the "+" port with "+". 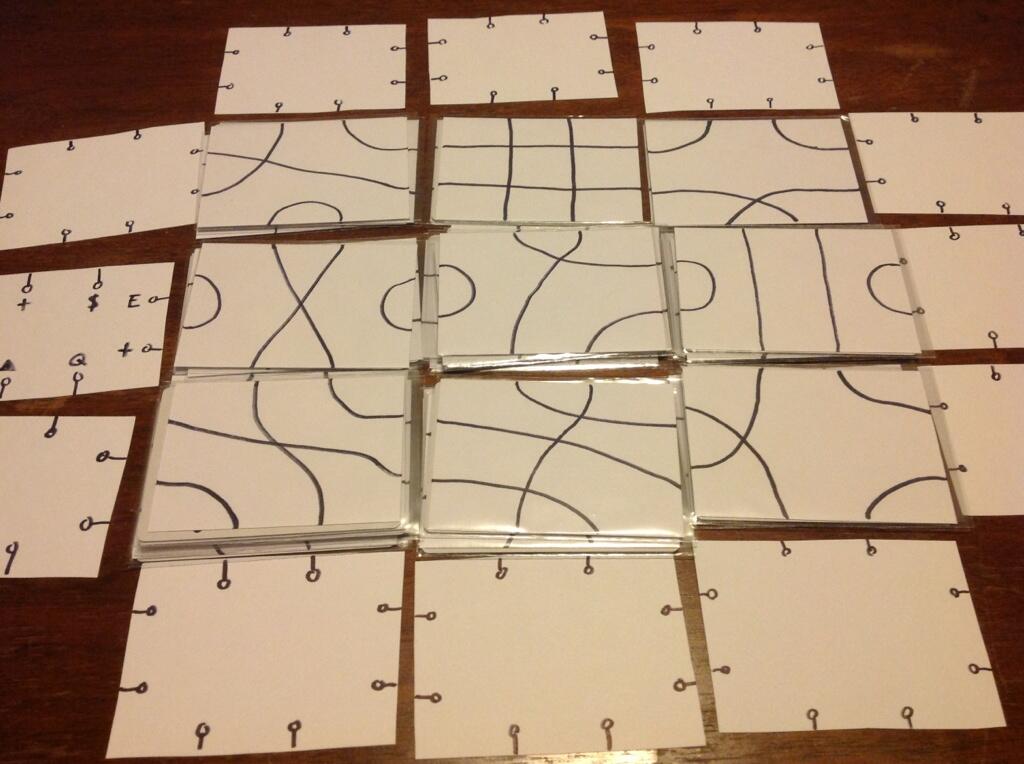 When the last path tile is played, the game is over and whoever has the most points wins! 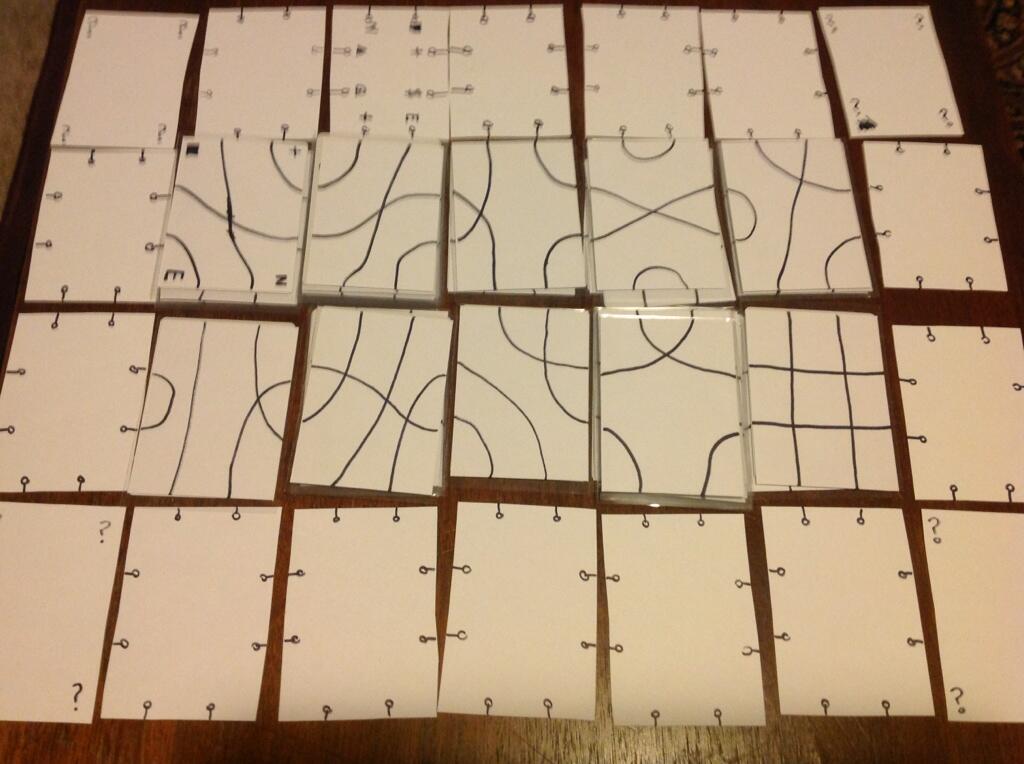 As with any modular game, you can make alternate layouts like this rectangle. With enough destination cards, you may also have donut-shaped boards or angled boards.


CONDITION CARDS
Right, so condition cards are one of the fun things that might bring this otherwise dry spatial puzzle into some family fun take-that territory. Here are some cards I've got in mind for basic bonus scores.
And here are some more action-oriented cards that act as one-time-use powers. The prerequisite for these cards is always "On a player's turn, instead of playing a path tile, she may discard this card to...
If you take one of these actions and it creates a scoring path, you can score it as usual.


NEXT STEPS on this idea would be to make a proper print-and-play prototype, but first I wanted to see if this idea actually sounded interesting to anyone but me. So, does it? You tell me! :)
Train Town