Ever get one of those ideas where you know how it ends, but you're not sure how it begins? Well, in continuing my exploration of triangular and square scoring, I've got that going on with this idea for a run-building card game themed around Russian nesting dolls. By "run-building," I mean a game in which you may play a card from your hand as long as it is a higher rank than the last card you played.

At the end of the game, you review your set of dolls and score along a Linear, Triangular, and Square sequence, based on matching suits within in the run and matching suits and ranks between the two runs as noted below. 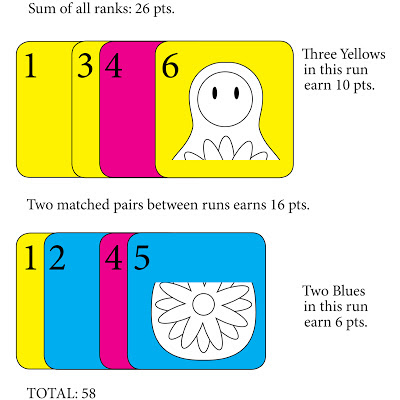 In other words, you score points equal to the sum of ranks in your run, triangular bonuses for matching suits within a run, and square bonuses for matching pairs between two runs. At the moment, the scoring seems pretty evenly weighted towards the linear bonus since it's least restrictive on its scoring condition. I wonder if I should change those to be alphabetical ranks, only awarding actual points for the upper echelons of the ranks, perhaps noted by stars.

Either way, the next step in development would be to figure out how players actually acquire these cards. Auction? Drafting? Trades? Not sure. The scoring mechanic is complicated enough that I'd want to keep the rest of the game very streamlined and simple, but it would be great if there were at least some simple trading going on, too. How about something like Jaipur?

On your turn, you can either take cards from a central public tableau or play cards from your hand into your set.


I'm still not sure what the endgame condition would be. When all players have played at least ten cards? That means everyone might have an incomplete run and rushing the endgame might be a viable strategy. Hm. That might work! Perhaps it's time to hit the table with this soon.
card game