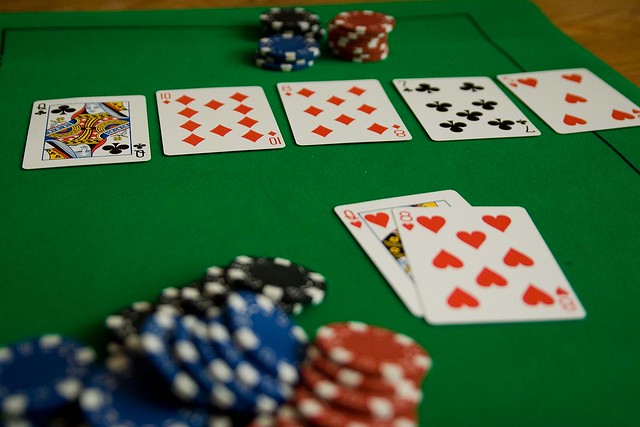 I'm a big fan of the drafting genre, like 7 Wonders, Seasons, Sushi Go!, and Among the Stars. Like the deckbuilding genre, I find it fascinating how an emergent activity from the CCG community could turn into a a full-fledged game genre of its own. I thought I'd try my hand at it today.

One of the fun things about drafting games is the tension of having too many good options, knowing that you'll have to pass some very powerful options to your neighbor. Based on their past choices, you know they're pursuing a particular strategy that will be greatly aided by this one last piece of the puzzle you have in your hand. Alas, nothing to do. You draft your own card and hope to get something better in the next hand.

But what if the game was as much about accurately guessing what your opponent would draft? And if you guess correctly, it would hinder his strategy a bit? Let's try this with a simple poker deck for sake of explanation.

To begin, each player is dealt five playing cards to their hand. The dealer then reveals two cards in the center of the table. The goal of the game is to draft cards in order to make the highest value poker hand, by combining cards drafted with the two community cards. However, there is a twist, described below.

Continue drafting, guessing, and revealing until there is only one card left in-hand. This last card is discarded and notes the end of the game. Each player scores points based on their poker hand.


Play two more rounds and then add bonus points from chips. Chips earn points equal to their quantity multiplied by itself. For example:


And so on. The player with the most points at the end wins!

I don't know if this is actually a fun game, but it certainly takes an emergent property of card drafting and makes it a mechanic of its own. Now when you know your opponent is going to take a particular card, you can get some benefit from that knowledge, too. What's more, the tension of drafting is even higher since you may end up double-thinking your neighbor. Do you take the card that gives you a straight flush, even though it's the obvious choice? Tense!
card game game design lab